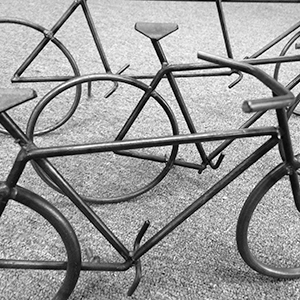 Metal artist Dirk Brown has lived in the High Country of western North Carolina since 1986. He received a Bachelor’s degree in Art, Marketing & Production from Appalachian State University in 1993. He initially pursued his interests in sculpture and metal work through employment with Charleston Forge where he was involved in all aspects of wrought iron furniture production and design. In 2001, Dirk joined Powell’s of Banner Elk where he worked with and learned from Ed Powell, a nationally known leader in the ornamental metal.

In March, 2006, Dirk purchased Powell’s of Banner Elk, incorporated the business, and began operating as “Blue Mountain Metalworks.” Dirk’s background in creative arts in combination with years of experience and strong forging and fabrication skills make him uniquely qualified to create high quality, artistic and functional metal work for homes and businesses.